Meet Dean Elizabeth Kronk Warner, of the S.J Quinney College of Law at the University of Utah 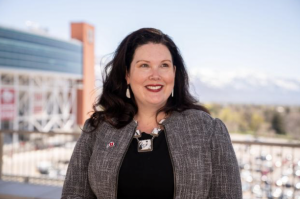 Who is Dean Kronk Warner?

Dean Elizabeth Kronk Warner, of the S.J Quinney College of Law at the University of Utah, is the school’s first female and first Native American dean. That matters. So does her scholarship, through which she has revolutionized the national conversation of environmental law and policy. When Dean Kronk Warner and I spoke, she was starting her second year as the Dean but she was already two decades into an intimidatingly comprehensive, impressive legal career. Always a force, and now helming the nation’s tenth-best environmental law school, Kronk Warner is perfectly positioned to pass down to her students the positive view of the law her parents passed down to her.

Her parents, after all, aren’t just the backbone of her childhood but a cornerstone of her professional career.  When asked about them, Dean Kronk Warner introduces her father by way of a story.  Many decades ago, he became a prosecutor by writing to every county judge in Michigan.  While most shot him down, the tactic eventually worked.  A judge in Luce County, in Michigan’s Upper Peninsula, hired her father. He would go on to have a storied practice, litigating against nationally-known lawyers—some of whom tried to recruit him to their ‘big city’ law firms. But he loved serving his community as a prosecutor, and so he remained until he became an administrative law judge.  Witnessing her father’s positive impact on their community firsthand is part of what inspired Dean Kronk Warner to become a lawyer.

Her mother, too, was an inspiration not just personally but professionally, transcending the challenges of her Native American upbringing to enroll in law school when Dean Kronk Warner was twelve years old.  Dean Kronk Warner credits her father with being a supportive advocate of her mother’s professional goals.  Experiencing her mother’s self-actualization provided another perspective of the positive side of a law practice.  Dean Kronk Warner describes her mother as being so excited for final exams that she would dress up.  For her, the exams were an opportunity to show the world what she’d learned—and she was proud!  That preparation was often rewarded, like the time she got an ‘A’ in tax law and was “literally skipping down the driveway.”  Eventually, Dean Kronk Warner’s mom became a tribal judge. And in that role, just like her husband, she served her community.

In the example set by both of her parents, Dean Kronk Warner saw up close the positive impact that law could have. And she determined to emulate it herself.

After graduating from Cornell University, she attended the University of Michigan for law school, in large part because of its American Indian programs—which she was drawn to because of her own ancestry. Since then, her career has served as a testament to the pursuit of one’s passions, both personal and professional. From her academic scholarship to her environmental stewardship, Kronk Warner has never strayed from the values and priorities instilled in her by her parents and her Native heritage. In doing so, she’s become a role model for the generations who follow.”  As Dean Kronk Warner has put it more succinctly, “How do we create, ‘Oh, she did it. I can do it too?’”

Dean Kronk Warner pioneered the scholarly demonstration of Indian tribes as models for environmental policy.  She notes, “because of [Tribal sovereigns’] distinctive regulatory authority and significant connection to the environment, [they] possess unique capacities to innovate within the field of environmental law[…].”  In this article, she advocates the idea of tribes as “laboratories” of environmental regulation.

In another article, Dean Kronk Warner identifies the underperformance of the federal government in addressing climate change, while simultaneously flagging other sovereigns who are filling that void.  But instead of focusing on states, Dean Kronk Warner identifies tribal governments as innovators in this area, whose approaches may prove helpful to other sovereigns.  Specifically, tribal sovereigns have included traditional ecological knowledge in tribal climate change adaptation plans to promote methods of community resiliency that have demonstrated success, utilize years of ecological knowledge, and are more cost-effective than alternative solutions. Additionally, tribal sovereigns involve their communities in their plans by surveying and involving community members in the adaptation implementation phase.

When we spoke, I focused on getting to know the Dean and expanding on her scholarship. So I benefited greatly from an interview she gave upon being appointed to her current role. She has been published in the Arizona Law Review, Colorado Law Review and Columbia Journal of Environmental Law. She co-authored the casebook “Native American Natural Resources,” and she co-edited “Climate Change and Indigenous People: The Search for Legal Remedies.” She practiced environmental, Indian, and energy law as an associate in the Washington, D.C., offices of Latham & Watkins, LLP and Troutman Sanders LLP. She was selected to serve as an Environmental Justice Young Fellow through the Woodrow Wilson International Center for Scholars and U.S.-China Partnership for Environmental Law at Vermont Law School. She has also been a visiting professor at Xiamen University in Xiamen, China, and Bahcesehir University in Istanbul, Turkey. And she was elected to the Federal Bar Association Indian Law Section’s national board of directors in 2011, and served as its chair.  Then she shifted from practicing at a firm to academia, first at the University of Montana and then at Texas Tech.  In 2012, she moved to the University of Kansas School of Law, her last stop before accepting the deanship in Utah this year.

She has also served as an appellate judge for her hometown Sault Ste. Marie Tribe of Chippewa Indians Court of Appeals in Michigan and as a district judge for the Prairie Band Potawatomi Nation in Kansas.

Like her parents, Dean Kronk Warner gives back.  She managed to find time to travel to New Mexico to visit the Pre-Law Summer Institute, a nonprofit dedicated to assisting American Indians and Alaska Natives to prepare for the rigors of law school. Through it all, Dean Kronk Warner has done more than just remember her roots. She’s returned to them in a professional capacity.

Dean Kronk Warner lives (and hikes) in Utah with her 3-year-old son, and husband, Connor Warner, who is joining the U in an assistant professor (clinical) position at the College of Education. Her advice for law students is simple and timeless: learn how to get people to like you, trust yourself, work hard, and pursue what you love.