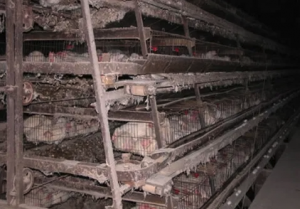 The great Mahatma Gandhi once said, “The greatness of a nation and its moral progress can be judged by the way its animals are treated.” As a strict vegetarian, Gandhi felt a terrible sadness seeing animals suffering, most people don’t understand that sadness.  Our country must do better and eliminate raising animals strictly for food.  Perhaps the concern for animal suffering isn’t persuasive; consider the enormous negative impact the meat industry has on the environment. After all, this planet is likely our only home!

Animals raised on factory farms are treated cruelly. Their suffering is unquantifiable.  They have no quality of life. As journalist Spencer Case writes, “None of these animals would exist without factory farming, but they’d be better off not existing. We shouldn’t cause this much death and suffering unless we have some extremely compelling reason for doing so.” Factory farmers prioritize well-nourished animals to maximize their output of meat while spending as little money as possible. This rapid growth is unhealthy.  In chickens, it causes acute heart failure and the inability of their skeleton to hold their weight causing movement difficulties. Jonathan Safran Foer writes in “Eating Animals”, comparing this abnormal growth to that of “human children growing to be 300 pounds in ten years while eating just granola bars and Flinstone vitamins.” What’s worse, is this extreme growth occurs in a space of less than a square foot to live. To put this into context, Safran Foer writes, “Step your mind into a crowded elevator, an elevator so crowded you cannot turn around without bumping into your neighbor. The elevator is so crowded you are often held aloft. This is a kind of blessing, as the slanted floor is made of wire which cuts into your feet. After some time, those in the elevator will lose their ability to work in the interest of the group. Some will become violent; others will go mad. A few, deprived of food and hope, will become cannibalistic.” As heart-breaking as it is for the individual animal, it’s also incredibly destructive for all animals.

The meat industry contributes more to global warming than any other industry or form of pollution! It contributes 40% more to global warming than all transportation in the world combined! Farms contribute to water pollution via the billions of pounds of drug-laced feces every year generated by the animals. These feces are then thrown into waterways killing fish and polluting the water. In fact, PETA estimates “A typical pig factory generates the same amount of raw waste as a city of 12,000 people.” In order to make room for the grain that is needed to feed these animals, there is mass deforestation. For every pound of meat harvested from an animal, they need to ingest up to 16 pounds of grain. Approximately 70% of global freshwater is used by livestock. The collapse of the environment is only one existential threat meat production poses to humankind, the rise of the possibility of a new pandemic is another.

Today much of the world is struggling due to the COVID-19 pandemic so I would be remiss if I didn’t mention the danger eating animals poses to our health. It, along with many other deadly diseases, stem from animals. Many different strains of the flu come from birds. Jonathan Anomaly explains that these viruses are passed around by “close contact between different species of animals gives viruses a continuous opportunity to mutate and reassort to create new strains; …many factory farms confine animals to indoor spaces that lack adequate sunlight or ventilation, which allows viruses to survive longer without a host.” As the factory farmers make sure these abused animals balloon to their market value weight, these animals are given a lot of antibiotics. When these animals are drugged with antibiotics and then eaten by us, over time we become antibiotic resistant. The Review on Antimicrobial Resistance estimated that “700,000 people around the world die each year due to drug-resistant infections. Without action, that number could grow to 10 million per year by 2050.”

We must address the existential threats from meat production, otherwise, they’ll obliterate mankind.

The Loneliest Whale on Earth: Who Should Be Held Accountable?