Shhh: The Whales Live There 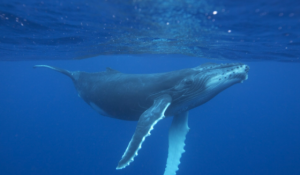 Patterns of evolution in ocean animal’s biology mimic evolution patterns on land, which allows us to compare which ocean animals are most like humans.  Perhaps surprisingly, Cetaceans (particularly whales and dolphins) are most similar to humans.  And yet, humans treat them poorly.  Specifically, humans contribute to harmful noise pollution.  One effect of the pandemic has been to show that with less commercial development, and less noise, whales are less stressed and therefore healthier.  We have a moral obligation to regulate our oceanic noise pollution.

Whales are extremely intelligent.  They dance, they play, and they communicate.  They also demonstrate considerable metacognitive reasoning through self-awareness.  This level of abstract thinking is astounding.  Because each population of whales generally share a distinct song, whales must be able to adapt it to ensure it succeeds over generations.  This is culture building.

Whale sounds likely facilitate breeding.  “Any successful animal in the ocean relies on sound for some basic life function,” says Christoper Clark, a bioacoustics researcher at Cornell and an expert on ocean noise.  Because light doesn’t travel far in the ocean, sounds facilitate mating, navigating, and maintaining social networks.

Underwater noise pollution increases stress hormones and disrupts migration patterns among many marine animals, including Atlantic humpbacks.  Additionally, it’s been found that zooplankton—including krill, a main food source for whales—are especially susceptible to loud blasts. An impact study published in 2014 by the Bureau of Ocean Energy Management found that hundreds of humpbacks could be negatively affected each year if seismic surveys were permitted in South and mid-Atlantic waters. A paper published in 2014 found that the numbers of singing humpbacks off the coast of Angola decreased as seismic survey pulses increased in their breeding grounds. And an article from 2017 detailed how the migratory speeds of some humpbacks slowed in response to nearby seismic blasts.

The oil industry drills into fossil fuels deep beneath the seafloor. Exploration companies create seismic blasts of sound from highly pressurized air guns. By analyzing how the sound bounces back, seismic-survey companies can map the subsurface. “This is the loudest sound we put into the water on a routine basis,” says Douglas Nowacek, a scientist who studies the link between acoustic and motor behavior in marine mammals at Duke University.

The Trump Administration promotes drilling.  Its 2017 decision to lift the ban on drilling in much of the Atlantic and Arctic Oceans was challenged by environmental groups, including the Natural Resources Defense Council and the League of Conservation Voters. In 2019, a federal judge ruled against the federal government, and the case is currently making its way through the Ninth Circuit.  While plans to open up drilling remain on hold, permitting for seismic surveys using air guns has continued to proceed. According to a spokesperson for the Bureau of Ocean Energy Management, these permits are still under review.