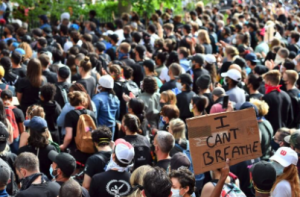 The COVID-19 pandemic is affecting African Americans at a disproportionate rate. Data from the New York Times shows that African Americans make up over half of all coronavirus cases in the county, despite only making up 13 % of the U.S. population. Some may ask why, COVID-19 is a virus, it affects everyone in the same way, right? Wrong.

One possible factor is that communities of color are more likely to live in overcrowded areas with higher levels of air pollution. We know that Covid-19 tends to have more serious effects on individuals with underlying medical issues, particularly lung problems.

And yet, the current administration has done nothing to address this racism. In an interview between Yale Environment 360 and Sacoby Wilson, an environmental health scientist at the University of Maryland who has spent more than two decades focusing on environmental justice issues, Wilson explains how the Trump administration’s moves to suspend enforcement of environmental regulations during the current crisis reflect a broader disdain for low-income communities. Wilson explains, “I think it is a slap in the face to many communities affected by environmental injustice because it says, ‘We do not care about you.’”

When George Floyd was killed by police officers on May 25, 2020, it sparked outrage across the country. Black Lives Matter activists started a global movement, which gained the support of countless individuals. Now, what does a group that seems to be focused on police brutality have to do with our changing climate? As explained by Patrisse Cullors and Nyeusi Nguyu, members of the Black Lives Matter movement, “Racism is endemic to global inequality. This means that those most affected – and killed – by climate change are Black and poor people.”

We’ve discussed how because minority populations often lack the economic and political resources, they are often forced to live in dense cities or polluted areas, placing them at a greater risk of being injured by the effects of climate change (such as pollution or flooding) and the effects of disease such as COVID-19. Throughout our country’s history, African Americans and minority populations have been silenced. The rest of the nation did not care about what they had to say. However, due to the strength of the Black Lives Matter movement, maybe now people will start to listen and understand not only the racism behind police brutality but that behind climate change as well.