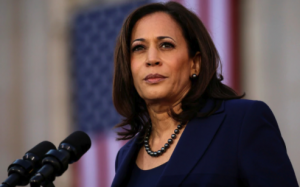 Senator Harris was picked by Presidential Candidate Joe Biden to be the next Vice President. Congratulations!

Because the best way to measure someone is by assessing their conduct over time, I’m going to review her track record on environmental justice.

Harris is committed.  In 2005, as the district attorney for the city of San Francisco, she created an environmental justice unit dedicated to enforcing environmental crime that affected poor communities.  She tasked Davina Pujari to lead the unit.

As the Attorney General of California, she continued to prioritize environmental justice.  In that role, she confronted the fossil fuel industry by opposing Chevron’s proposed refinery expansion in Richmond, a majority Black and Hispanic city.  She also joined a coalition of 17 Democratic attorneys general called the AGs United For Clean Power and continued her work holding energy companies accountable.

Later as Senator, she and Representative Alexandria Ocasio-Cortez of New York unveiled a plan to introduce climate legislation that would ensure new environmental regulations and legislation consider environmental justice before becoming law. They also introduced called the Climate Equity Act. The act would set up an Office of Climate and Environmental Justice Accountability within the Office of Management and Budget.  Along with Senators Cory Booker and Tammy Duckworth she introduced legislation that first acknowledged how segregation and racist zoning codes subjected communities of color to the effects of climate change and left them with limited resources to address ongoing environmental health disparities, and then aimed to engage impacted communities in government decision-making processes.

Importantly, she supports abolishing the filibuster, a step that will likely be necessary to get any climate or environmental policy through Congress in a Biden administration.

Detractors might note that her plan did not include a full ban on fracking and she has taken donations from the fossil fuel industry in the past.  Fear not, she has not accepted donations from fossil fuel companies this election cycle.

She’s the real deal and we’re better for the work that she’s done.