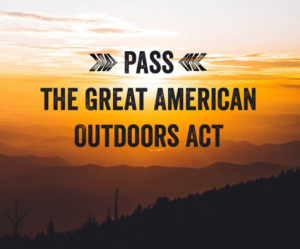 The Trump administration has reversed 100 environmental protections and proposed deep cuts for conservation programs. It nominated William Perry Pendley to lead the Bureau of Land Management. Pendley’s track record makes for a grim appointment: he wants to sell off all public lands and is more partial to armed vigilantes then Black and Native Americans.

However, he also passed the Great American Outdoor Act. The bill was passed with overwhelming bipartisan support. It fully funds the Land and Water Conservation Fund and devotes $9.5 billion towards restoring crumbling recreational infrastructure in our national parks, forests, wildlife refuges, Indigenous schools, and public lands.

In addition to environmental sustainability, the bill could provide much needed economic stimulus. Nationally, outdoor recreation contributes roughly $778 billion in consumer spending and supports 5.2 million jobs. Every $1 million invested in LWCF could support between 16 and 30 jobs, while national park funding in GAOA could support 100,000 jobs, $17.5 billion in economic output, and contribute $9.6 billion to the US GDP.

By my count, this is the second bill, following the John D. Dingell, Jr. Conservation, Management, and Recreation Act, which provided support for wildlife corridors and expanded access, that the Trump administration has signed into law that protects wildlife.  But while we celebrate the passing of this bill, let’s not forget the tens of millions of acres of public lands and waters debased, pollution increased, Indigenous sites desecrated, recreational opportunities forgone and wildlife pushed toward extinction.